Name: Hugh Johnstone
Tweet dis: Cerebral off-spinner, legside-loving batsman, sharp gully and fearless umpire. The Don (“What’s Miami Vice?”). Moral heart of the Gardeners.
Profile: RHB, OB
Pen portrait: His position at No 2 on the list of Gardeners is, perhaps, misleading. Founder member, batsman, bowler, all-round fielder, secretary, treasurer, selector, tour organiser, captain, scorer, innovator, umpire, tea-maker, statistician, website programmer – Hugh can comfortably lay claim to being Gardener No 1, although he would never be found promoting his status.
His bowling can be underestimated, too. The cherubic features and gentle run-up catch many by surprise as he drifts one through the gate or pouches a sharp return catch. The evidence of 220 wickets at 16.19 – a club record – tells its own story, but not that he is often called on when the going is toughest. His best return, 5-25 against Strongroom in 2006, came when a depleted side most needed him.
But he is also the first to stand aside so that another can have their chance, whether in the field, where his reassuring presence at gully or a dangerously short leg has garnered – or rather Logied – an outfield record of 60 catches, or the batting order. Such generosity belies his excellent record with the bat, particularly in the early years. His 89 against the Citizen in 2003 – in a stand of 160 that was the first-wicket record for six years – should have been turned into the club’s second century. A rare victory over Ventnor the previous year was a true reflection of his all-round talents and commitment. His 4-2 with the ball was possibly less important than the catch on the cover boundary to dismiss Ventnor’s top scorer. Only after the end of his match-winning stint as opener did we discover that taking it had broken a finger.
Inaugural players’ player of the year, and bowler of the year four times, Hugh is equally at home discussing Phil Bainbridge’s record at Gloucestershire or the use of “ge” in Aristotelian manuscripts. His nickname the Don, earned for his academic prowess or cricketing nous, despite some of his team-mates’ memories of a pastel-coloured-suit-wearing actor in a 1980s TV cop show, is eminently appropriate. IMR

Name: Noel Lebon
Profile: RHB, RFM
Tweet dis: Thespian, troubadour, fiendish inswing bowler, spearhead of the attack, and choice companion on long car journeys. Acrobatic close catcher.
Pen portrait: When Noel first appeared for the Gardeners in the summer of 1996, some may have doubted his offhand claims that he bowled inswing. We were soon set right. In he steamed, shirt-tails billowing like Fred Trueman’s, to singe the openers’ pad-straps with a searing spell. Soon enough, a ball pitching outside off scythed back through the gate; the oppo’s captain, somewhat mouthy before the game, trudged off muttering, flattened middle and leg stumps announcing the arrival of our strike bowler – full of intent in his run-up, jubilant in his wicket-taking, never less than loquacious in the dressing room.
Following his departure to mittel-Europe, Noel became the quintessential overseas amateur, dropping in often enough to be a formidable Scottish tourist and well-known on the Isle of Wight. How the heart of the infielder leaps to see the inimitable flowing shirt, the arc of the purposeful, predatory run, the Procteresque inswing unleashed on the unsuspecting openers. How John Lloyd struggled to get a word in edgeways on their first encounter on the back road to Balmoral one a hungover tour Sunday morn.
Noel’s purplest patch saw him scoop the 2003 bowling prize with 25 wickets at under 10 a piece, 60% of them bowled, at economy rate well under three an over. On that year’s Scottish tour, Noel returned 9 for 40, with a top order three-for to stymie our auld vanquishers, Strathmore, and 4-17 against a traumatised Balmoral.
But Noel is nothing if not consistent: in line, length and conversational zeal. Long heading the all-time averages, he became our third 100-wicket taker in 2009. With a 14.24 average and one of our tightest economy rates, he remains the sine qua non of strike bowlers. No wonder Mike turned to him in the tightest of finishes to bowl us to our 2008 tie against Jesmond Jaguars. With the willow, Noel’s tally of not outs is impressive; in did-not-bats he appears unassailable. Good catcher and generous team-mate, Noel is the quintessence of proper wickets: thin edges and stumps a-flying. WS 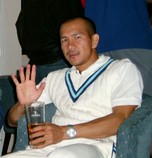 Tweet dis: Aussie, midget gem, ball of energy. Went walkabout for four of five seasons. Now back in Ramsey Street. Rapid – in all departments, mate.
Profile: RHB, RF… everywhere
Pen portrait: The Gardeners have had a few players with unusual pedigrees. Try a Swiss-Serb (Mirko Sekulic) and a Bulgarian (P Petko). But none is likely to be quite so extraordinary or such a fair-dinkum cricketer as Ty-Ty Lim. He arrived Down Under as a Cambodian “boat person”, and became as Aussie as XXXX. To us, he was a mate of Glen Barry (via Pete Dewar), and a dynamite all-rounder.
He played only 21 matches, and we won 71% of those fixtures. His stats (decent) don’t tell the full story. His ground-fielding could easily save 20 runs a time. He had the energy of a video-game character. Numbers can’t convey the confidence and zip he brought to the side. Short, with nimble feet and a great eye, he was able to cut and pull almost at will. His bowling was skiddy, at a pace that regularly beat the bat.
After 15 appearances in 2004, his debut season, the rest of Ty-Ty’s matches were spread over the next four years. There was talk of an injury and of “footie” (the sort with sleeveless shirts), and the two may not have been unrelated. There was an enthusiasm for mountain-biking or paragliding or stately homes, whatever it is that Australians do to cram it all in when they’re over here. His interest waned.
Ty-Ty had shown his worth in his second game: 8-4-13-3 as we dismissed Kings for 97 and a steadying 35 not out to seal the win. His best knock was 79 against OMT in a total of 252-4. Against Hornchurch, he sparked a collapse from 119-3 to 131 all out, finishing with 11-6-18-3. The abiding memory of Ty-Ty’s cricket, however, is a run-out. Pretenders’ Mark Fellowes thought there was two to a vacant third man; Ty-Ty hared round from the cover boundary – a flat throw and Fellowes was yards adrift.
Ty-Ty Lim, then: a spring-heeled, south-east Asian Super Mario, seemingly controlled by the Xbox of the sporting gods. RC

Tweet dis: His arrival at the crease empties the bars – or causes cups of tea to be saucered. In the field, he has immortalised our motto: “Help him!”
Pen portrait: A natural timer of the ball, John Lloyd has an easy grace redolent of a less frantic, less complicated era. Had he been born a century earlier it’s possible to imagine him as a pioneer racing driver wowing the crowds with his fearless style and panache, hair blowing raffishly in the wind before spectacularly crashing, emerging nonchalantly from the wreckage to cheers, taking the bus home and reliving the whole day in his smoking jacket over Battenberg and a Woodbine.
While never carrying an air of permanence at the crease, Lloydy does have a consistency of approach, which is endlessly reassuring to his team-mates. Reflecting on an innings, however farcical or calamitous, with his post-dismissal cigarette, always self-deprecating, never petulant, he has a magical knack of putting the game into its proper context in life: important, but never all-consuming. Though his average has been in freefall for years, John was party to three of the best stands in GCC history, with scores of 71, 85 and 79 not out; and none who witnessed it will ever forget his majestic three-ball 4 at Stirling against a brisk left-arm seamer – an innings as daring in conception as it was cold-blooded in execution. He sweeps more than a witch’s broom, and almost as wickedly. The hankie on the stumps is never a white flag, more a gauntlet thrown down.
A reluctant bowler, John once bet £5 against himself taking a wicket in his first over. He proceeded to drop a caught-and-bowled chance off his first ball, but it didn’t take him long to squander the fiver, as he took a wicket in each of his three overs, ending with 3-12 and the plea never to bowl again. Mid-off, though, has been made all his own, as he baits bowlers with dry sarcasm.
Sporadic brilliance has latterly given way to sporadic appearance. At the time of writing, he is still teasing his army of fans with the threat of retirement. Again. Say it ain’t so, J-Llo. MA