Profile: RHB, OB (really?)
Tweet dis: Our second-most successful bowler, a spinner who doesn’t spin them out but thinks them out. Bats like a wall – of plywood.
Pen portrait: Other spinners get wickets with turn: Clayders gets his with intensity. Each ball is a furious blur of mental energy, a question in search of a solution. Some end unhappily: a wide or a four; Rich kicks the air and returns angrily to his mark. More often, his quarry is drawn into the battle of wills, and found wanting. Rich also strips things down as a batter – to the forward defensive, deployed as if all other shots were fripperies. This is cricket as Samuel Beckett would recognise it: a focused act of survival. And survival, perhaps, is Rich’s greatest gift to the Gardeners, guiding the club into another decade. He runs it without the intensity of his bowling or the Beckettian starkness of his batting. No, here other attributes come into play: wit, patience and love for the game. LHT

Profile: LHB, RM
Tweet dis: What goes on tour stays on the card table. A stylish southpaw with more aces than Shane Warne. Or at least more of his own hair.
Pen portrait: Up and down the order more times that Samit Patel on a club curry night, Pokerface is an elegant left-hander, strong in the classical “V” between mid-off and mid-on but also quick to punish the short ball. His rookie season (2011) saw him cast as an opener; in 2012, though, he looked increasingly at ease as a middle-order finisher: nuggety in patented Graham Thorpe fashion when not “batting in a dress”. A classy knock at No 3 against Highgate hinted at what was (eventually) to come. On the “Wales” tour of 2013, he nearly scored three consecutive fifties in opening berths. At least one of which looked set to reach three figures before exhaustion/the need for a roll-up intervened. His death bowling at Bamburgh 2012 was a revelation. That he had to be rescued from the local lasses less so. DW/RC

Pen portrait: As befits a man who made his first real mark for GCC running backwards into a hedge (Ewyas Harold, 2013), Antoni Rogowski (“standard spelling”) sees the wood for the trees – except when finding his way to Highgate. He’s a see-ball/hit-ball merchant, revelling in his ability to go big or go home (often at the same time). As long as his weight is forward, the force is with him. His bowling is almost as lively as his gob (“All right, fellas, this guy's been in here for far too long already,” he quoths to every new batsmen) and improving with each game. His threefer against Jesmond Jags at the start of the 2014 season was crucial to a famous win. Antoni imagines he sledges like Jimmy Anderson, but with better vocab. Make that Jimmy Tarbuck more like. NC/RC 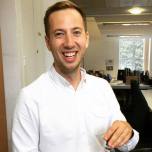 Tweet dis: “Do you have Powerplays?” That says everything about the way Piers plays. RBG turned CBG. What’s to teakle? Check the next Cricket Lexicon.

Pen portrait: Big dirty stinky pace, as Dizzee Rascal nearly sang. Dirty stinky pace. Piers’s cricket is always fast. Its logical compression would be 1/1 matches. Not one over, mind, but one ball a side. Piers would hit what received for a glorious straight six (he manages one of those a season, without fail). He’d pitch his delivery half-way down (his indoor length) and it would be hit for six in turn. The superball would follow the same pattern, until Piers’ relentless zeal caused his opponent to tread on his own stumps, begging for mercy. That’s one possible definition of being Teakled. Another might be that straight six. Or how spin can bring Piers to a standstill (witness his otherwise dashing 34 against Carpe Vinum). But, boy, did he hit his straps against Bumblers. Two in two? Remember that finger! RC 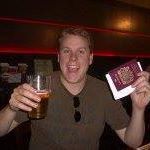 Name: Jim Warbrick
Profile: RHB, RM
Tweet dis: Merseyside red to Thommo’s toffee, Jim is a top-three bat with time to spare at the crease; on form, a class act. Poppadom fingers, mind.
Pen portrait: Filling the scouser-shaped hole in our lives since Ian moved to pastures parental is Jim Warbrick. Well, not filling it exactly (who could possibly do that?), but rattling around and occasionally touching the sides. A composed top-order batsman, Jim recovered from a busted finger and false start to his GCC career in 2011 by bagging the 2012 batting award. It was richly deserved, as he looked the most consistently assured of our batsmen on the slow and stodgy wickets that the unseasonal season threw up. After his pina colada of a fifty against Palm Tree, breezy 30s against Bohemians and Bardhill had more flourish than Hawaiian shirts, but vigilance to boot. Underused thus far, his swingy dobbers could winkle a few wickets. Trott-like in the field, Jim grazes in the deep – occasionally roused to rapid cantering under a high ball. RC