The Tour that wasn’t really a Tour, but felt like a Tour, Tour. 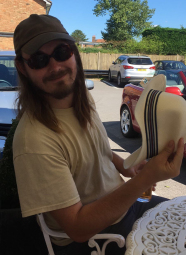 Our traditional August Bank Holiday tour was upon us. The sun was shining, not a cloud in the sky, alas no real tour this year. Circumstances meant we just had our now regular Marlow Park fixture on the Monday.

With just one game in the schedule the Gardeners’ rank and file decided to make the most of the picturesque Berkshire surroundings and invoke the spirit of a tour, but for one night only.

Courtesy of the Chancellor our digs were at beautiful Bisham Abbey on the banks of the Thames. A Magners on ice, in a pub carpark wasn’t the idyllic setting we’d quite been expecting but was enough to get the juices flowing while the early arrivals waited for Tom and the Cunninghams.

Chumpy’s recon suggested two watering holes in Marlow. The Ship for late afternoon Pimm’s and in the sunshine was a prime spot. As the DJ span out some blissed-out Balearic beats the most stressful thing we had to deal with was the choice between Mediterranean and Indian tonic water (a heated discussion) for our gins.

This was but an aperitif for the evening’s entertainment at none other than Clayton’s (not Richard’s house, just a slightly grotty pub) where they were serving up Carnival themed jerk chicken and rum punch by the gallon.

Highlights included brushing shoulders with Mark Foster (for Cunners at least) Sam making friends with a 2nd row [he looked like a prop to me. Ed] from the Cornish Pirates and then beating him in an arm wrestle. With the brawn came brains from Tom, as he out Spartanned “some doofus” who refused to accept Sparta and Troy were real places. With a cry of “just ask Heinrich Schliemann” (and Cunners who’s actually been to Troy) six very jolly Gardeners departed.

Cue the post-pub kebab van, where the queues were long and burger sauce plentiful. An intervening encounter with a pair of creatures of the night meant six splintered into four chip and doner-laden rum-punched Gardeners navigating pitch dark country roads, and two, labelled ‘Bert’ and ‘Ernie’ for these purposes, who chose alternative company and refreshment via a taxi to Maidenhead.

Monday morning and match day. We wake to repetitive dull thuds punctuated by grunts and groans. You’d mistake it for another famous Metronome hangover but no, our rooms are next to the tennis courts and it’s just the morning coaching sessions. The corridor to our rooms is adorned with Olympic heroes and World Cup winners; if this environment can’t inspire a win today what can?

Breakfast taken and time to catch up with ‘Bert’ and ‘Ernie’. Did they make it back? Yes but news is sketchy at best. There are rumours of an omerta as they remain tight-lipped. Instead, we convene by the river to watch the rowers and the geese while Skipper talks tactics. 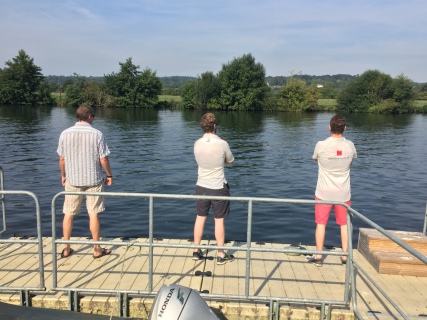 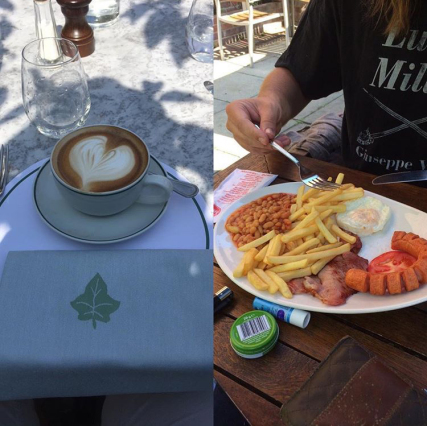 A Team Divided (by just a garden fence)

On one side The Ivy for tea, crumpets and pastries.

On the other it’s a morning Bender at probably the only Wimpy with a garden terrace. 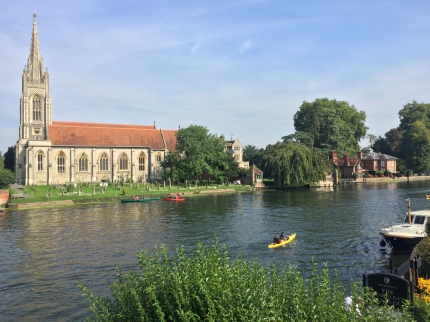 Another gorgeous day at Marlow Park CC and we’re joined by the rest of the fellas. The rumour is the oppo might be at less than full strength due to their 125th anniversary celebrations the night before.

“I was so drunk last night, I ate five cooking apples,” chirps a bystander. 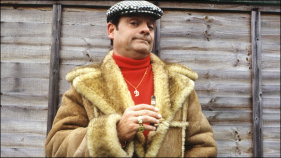 Metronome and Cunners share the new ball. Openers Pete and Del look to make headway hoiking a few to the boundary. Moral victories but no breakthrough until the 5th over where Rob gets his in-ducker through Del’s defenses. Apre moi le deluge Rodney as the middle stump does a cartwheel,

Due to a clerical error we were fielding 12 so here began a fielding rotation system, once our full team was assembled, usually not before the 5th or 6th over these days.

The first rotation was cunningly orchestrated by ‘Bert’ so that ‘Ernie’ left the field to discover Bert had invited last night’s company to watch the game. Talk about batting on a sticky wicket!

Back on the field Greg replaces Cunners and after some initial no-ball befuddlement he forces Stephens to play one shot too many. Tom running round at mid-off takes a neat catch. Both openers gone in the 10th over 50-2.

Greg smells blood and before number four Pillai can settle he’s nicked off to a Struthers special. Steven goes one way then the other and holds on to a one-handed blinder behind the stumps.

Cue Sam: down hill off the long run, cranking up the rhythm from the River End and getting faster as he goes. His first ball after drinks rips the left-handed Ralphs’s off-stump out the ground. With Thumper’s left foot digging holes at the other end the groundsman will have some repairs to do. Wicket maiden. New bat Goosen Snr is camped on the back foot and can only flat back a ball straight to Sam who jumps, lands, looks again and the ball lands in his mits. 63-5. An Al Desco Sandwich Moment-winning spell of 7-1-13-2.

Cunners returns with two really tight maidens (no not them) but is left wicketless today.

The new combo of Humphries and Murtaza not letting the batsmen settle. A Chancellor classic removes the 2nd Goosen family member, who’d played three different shots before he was clean bowled. With Skip noticing the Marlow ranks getting shorter and younger he does the honorable thing and takes pace off the ball. Enter Clayton R. stage left. Having lost none of his crafty skills in the Oxfordshire wilderness he rattles through a 6 over spell, 3 maidens for just 9 runs. Removing the long leavers of Bradley for 18.

Chris, Tom and Matt complete the quartet of tweak facing down the Marlow lower, and junior, order. Hoggan Jnr leads by example making a nice 20 before Matt has him caught by the Chancellor. This brings the third Goosen of the day, Kasia to the crease. Making Rich sweat on his field placements she then marmalises a length ball through the covers, suffice to say the silly-mid somethings are pushed back.

The third Hoggan and tenth Marlow wicket to fall goes to Matt and a comfortable catch for Olly at short fine leg. Not before little Joe shows us the classiest shots of the whole afternoon leaving us chasing a little more leather than we expected.

Olly and Ed stride out to the middle after the break looking to make headway into a modest total. Marlow looking to prove you definitely can win something with kids, open with Hoggan and Ambrose. It has a good ring to it.

Olly and Ed, battle steadfastly [some might say turgidly. Ed.] to 17 from the first 10 overs when Ed falls for a robust four off Ben Hoggan. With a RRR of 3 we’re not unduly worried though.

Fresh from his 50 last week Matt goes in at three and starts striking the ball beautifully until he managed to cloth one to mid-off; out for 12.

Saj, prowling up and down the clubhouse like a caged tiger now gets his chance to move the score along. Olly falls shortly after though lbw to Pillai. A huge Cunningham stride so it must have been low and plumb. (n.b. not our own umpire) 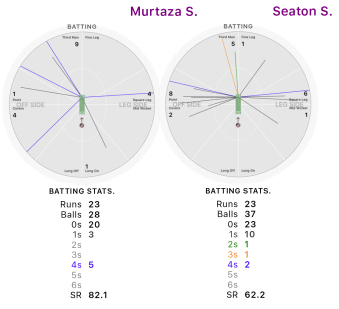 With Murtaza and Seaton at the crease, a common sight this season, surely we can get over the line. Confidence is high, I repeat, confidence is high! After dishing out some meaty punishment, Saj eventually gives the wicket keeper a second bite at the cherry in two balls and gets himself stumped off Ralphs.

Steven is bowled by Stephens shortly after. A partnership of 45 gets us moving closer to the target and the M4 though.

With the public dispersing for their bank holiday bbqs and the oppo’s scorer nodding off, it’s left to Skip Tom and Vice Nick to see us home.

A handy 22 from 25 balls from Cunners and tidy 10 from Tom take us over the line in the 31st over. Nick bludgeoning the only six of the match to deep mid wicket to finish the tour in style.

This is our first win over Marlow, albeit against not as strong a side as previous encounters and secures us our winning season. Now it’s just a case of finishing well. 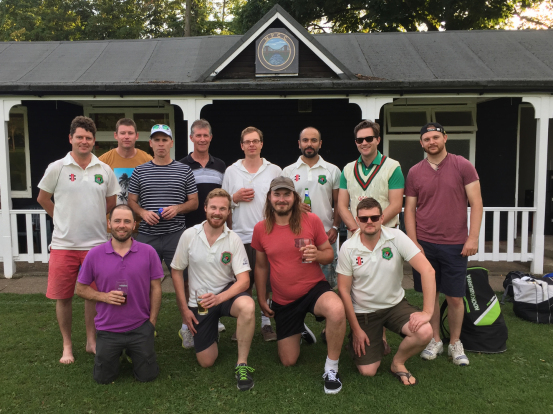 As we loaded up and headed east, The Tour that wasn’t really a Tour, but felt like a Tour had ended. Was it really only 30 hours of fun? Joining the usual Reading Festival crowds heading home we hit the M4, an orange sun setting in the rear-view mirror, Absolute Classic Rock pumping out Van Halen, AC/DC, Queen and ZZ Top.

Marlow is conquered, in more ways than one.