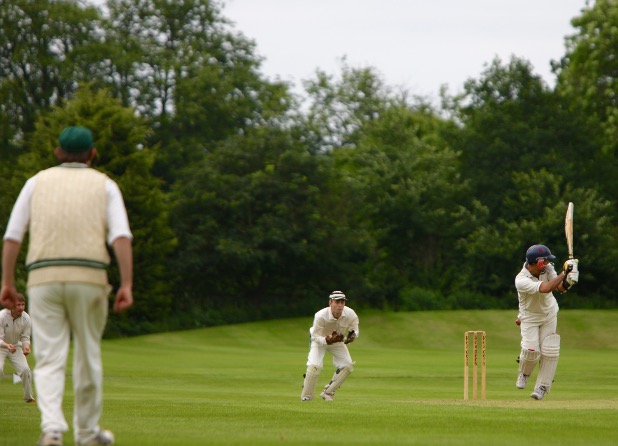 Another beautiful Sunday morning brought the GCC back to their home from home, D.P.L. HQ at Gallery Fields, again in pristine order and again manicured to international standard. Sadly, the same couldn’t be said for the clubhouse toilets, boasting a furry double floater resembling two oversized lamb koftas floating in a sea of retarded sexuality. Shit sandwich!

While that temporarily raised team spirits - Struthers mentioning the possibility of putting the kofta on a length to intimidate what looked like decent opposition in the nets - the same couldn’t be said for our timekeeping. We eventually took the field as a very fragile-looking septet (another GCC record to fall this season?). Messrs Spirling, Phoplankar, Hunter-Tilney and Murtaza must all atone in their own particular ways for their tardiness (yes, that's an "a" not a "u").

With a shortened square boundary and precious few fielders to cover it, our first few overs saw some marvellous defensive shots racing to the boundary much to our dismay. Cunners and Struthers opened for GCC, for once Cunners getting a mild spanking in his first over and Struthers being by far the more frugal of the two lefties. Eventually some rhythm was found by Cunners as he removed the younger Schneider…with a pearler that swung in only to dart away, dislodging the top of off-stump! Big wicket as he looked quite decent. Still no sign of the Fantastic Four though. Greg’s second over saw a snick to first slip unceremoniously dumped on Ferris’s shoulders for not being there yet! Luckily, he made amends when he finally did arrive with what turned out to be a miraculous catch at cover considering he was practically horizontal for most of the day following his midnight booty call the night before. Two down. This quickly turned to 3 down as Cunners removed Thurston with a gentle edge superbly taken on the floor by “Easy” Steve Seaton behind the stumps. Confidence was sky-high as Eduardo tried to cajole us into thinking we could have them all out for a quaffable 140. This saw our three latecomers all stumble onto the pitch, and with the energetic sounds of the Jazz Age drifting across the ground from next door, we were finally off and running.

Ironically with a full XI finally on the field, the wickets suddenly dried up. This had less to do with GCC wilting in the afternoon sun and more to do with ex/occasional GCC legend Shomit Dutta coming to the crease to construct a superbly weighted 116 not out, rescuing his side from 99-6. Somewhere in between, the Dixieland also dried up, leaving an ominous silence ringing in our ears only to be rudely disturbed by Cunners and Chumpy trying to sledge the batsmen from square leg! We will play cricket in silence from now on, we promise. By now, Saj had built up a good head of steam with his long and winding run-up to take 3 quick wickets including the prized double-scalp of Lambert & Butler, as well as Finnegan. Chumpy was brought on late in the innings, which saw him make his obligatory breakthrough in his first over, courtesy of some fine juggling from Struthers at long on. Moment of the first innings though was probably Metronome not thinking fourth dimensionally and bringing us all in against the new man only to be spanked unceremoniously through the on-side for consecutive fours by the cigarette-chugging 75-year-old Doc Brown…

Always one to chase revenge to the bitter (or lager) end, Robbo finally rained his seething vengeance on him by getting him stumped off the very last ball. Although this was much more to do with Easy Steve’s magnificent keeping than Nome’s quest for payback. Gaieties 218 off 40. Top effort from our bowlers considering the wealth of talent Gaieties had in their batting and Shomit's obligatory century.

After another supremely over-stocked tea, which featured everything from Chumpy’s pepperless Cornish pasties to Ludo’s moreish Salmon sarnies, and Tackleberry’s crate of ploughmans, to Rob’s Chinese drumsticks (yes, we got it), the big chase beckoned.

New opening pair of Cunners Snr and Sana got things off to a marvellous start, superbly complementing each other with their divergent styles.  Cunners with his AB de Villiers improvisation put away a couple of leg-side sweeps for 6 that would have made Abraham himself wet with envy. He even managed to include a few atypical blocks that turned a few heads at the clubhouse. Sana with his wristy wizardry was the Hashim Amla to Cunners’ AB. His flick through the covers for 4 late in his innings was the batting highlight of the innings for me. Six albums and 100 runs later, the opening partnership was finally broken with Ol going for an inventive 64 (4x6s; 6x4s). Sana followed soon after for a well-grafted 43, unfortunate not to get his half century. This only brought Elliott and Murtaza to the crease, the Rapier & Broadsword, who went on to pulverise any Gaiety hopes of a late come-from-behind win. How have we not seen these two in partnership more often? Jamie was eventually run out for 34, hopefully the portal to more runs from him this season. It was then left to Ferris to see us home with a muscular 1*.

Great performances from all and sundry as it was a real team effort, but man of the match has to be that man again, Saj Murtaza, for his 3/26 followed by his 59*. Chasing down 218 in overcast, dark conditions, our batsmen deserve high praise for their efforts. It also shows how much simpler a big run-chase becomes when the top order fires. Long may this last. With our first win at home finally under the belt, and 3 wins 3 losses finally prove that 50% of the time we win, everytime! More of the same please, lads… 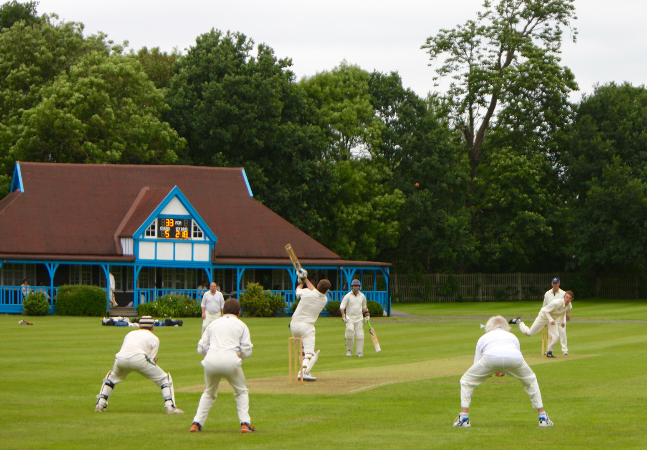