Keen for recompense from last week’s loss against Strongroom, we were not if a little disappointed to find they couldn’t put a team out. To the fixture list, where we found Grimsdyke CC; a no nonsense, straight batting, Boycott invitational XI reat out o’ pit wi a lump o’ coil f’ tea. Ee by eck, the Nome was excited at the prospect. No. Instead we were greeted by 9 Sri Lankans from Finchley. Who’d have thunk it? 45 minutes after the scheduled start they were nowhere to be seen. DI Humphries unleashed the bloodhounds on facebook and got a reply. In dribs and drabs they arrived, and we got underway an hour and a half late. 7 men took to the field plus a generous Gardeners sub fielder. The game reduced to 35 overs.

Phil, with a fresh hangover, opened with Dave. The feet were understandably slow to get moving. After a couple of sweetly struck boundaries and a broken bat he fell for 16.

Dave meanwhile was at his nuggety best. With skipper Jamie joining him in the middle they exploited the gaps, dabbing a single to third man was the way to go. Although seeing Dave ‘Dab’ would have been truly worthy of a Sandwich Moment. Sadly not to be. We’ll just have to make do with Michael Slater instead. 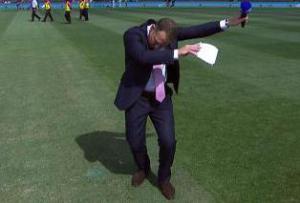 There were a lot of early appeals for lbws and nicks but after last week’s trigger happy gun slingers, Chumpy and Steven’s hands remained firmly in their pockets.

Another gap in the field found and cue sub fielder no.1 (Macleod) Chasing, sliding, swooping and throwing in one action just like on the tv. The first of the day’s un-Gardener like fielding. Dave was ticking nicely, the singles punctuated by some trademark cuffs for 4 through point, the highlight being a gorgeous sweep shot behind square for 4. Finally falling for 45 c&b to Fernando. Mamma Mi.. (no, I told myself I wouldn’t do that)

Jamie, looking to push the run rate along goes after anything wide with a full swing of the bat frustratingly finding a fielder but dutifully takes the singles on offer. After a couple a meaty blows for 4 he secomes to the nippy and accurate Harshaka blasting one to the covers where sub fielder no.2 (Fryer) is waiting, sticks in those massive mits of his. Then follows a little toss in the air of delight before realising he’s caught out his own Skipper for 28. [fine]

With Olly falling shortly after, Steven joins Saj in the middle for the last 10 overs. Steven looks to get the scoreboard ticking. Saj takes his usual few overs of dead-batting before teeing off (we hope). We’re in luck and he does. Steven; ever the team man takes the one to give Saj the strike. Grimsdyke are bowling well, tight lines and hard to get away. Until a miscalculation means everyone is bowled out, cue the 3rd change bowlers Kavinda and Nash, just what Saj and Steven were waiting for. Saj smashes Nash for a 6 behind square, just where he parked his brand new Jeep Cherokee. Believe it or not dear readers, his first 6 of the season. Shortly followed by three consecutive 4s, 15 from the penultimate over wins Saj the Sandwich Moment. Very much the Smash to Dave’s Dab. Time for a last over dash, Steven tries again to get Saj on strike but sub fielder no.2 (Fryer) swoops in the covers, throwing to the bowler’s end to run him out. [fine]

The Clan Macleod strides to the non-striker’s end. 3 balls left, two 2s. Last ball and the Highlander still swinging his sword hoping for a hit. Saj then falls on his going for the last yahoo and is stumped by Akhila for 45. The Highlander sheaths his, unblooded, to fight another day.

The Gs finish 169-5 thanks to Saj’s fiery finish. Something for our bowlers to bowl at at least. Although we fear 30 or so short.

Worthy of the Sandwich Moment itself the final Al Desco tea of the season is unpacked to reveal a Smörgåsbord of delights. A little extra eh Dan? Thanks, they’ve been super tasty again this year.

It’s another sweltering hot day, now clouded over but really humid. Slightly laden from extra tea the Gs take to the field.

Walking to the middle Dave shares an anecdote with the Nome about a succulent lemon tart he once had the pleasure of consuming during tea which caused him a spot of wind while taking a quick single. Much to the amusement of the opposition. Today’s Al Desco tea was likely to have the same effect. Rob picks a piece of carrot cake from his teeth and measures his run, Dave remarks “I don’t want to have to retire to first slip because I can no longer touch my toes, I don’t want to be that wanker!”

With that, the evergreen Woodhouse takes his position in the covers ready for the first ball.

170 in 35 overs seems defendable, even on a pitch dryer than a nun’s gusset and an outfield like granite. Rob and Sam take the new cherry, a couple of tight overs keep the openers Baccar and Harshaka at bay but in creep the loose deliveries and begins the pattern of the afternoon. With the lightning fast outfield everything that was struck with venum went to the rope. One moment of comedy is provided by the Chancellor trying to claw back a ball from the boundary edge. What was described after by Jamie as a ‘scrotum scraper’ Chumpy’s whites are dragged to his knees to reveal his trollies, as the ball trickled over the rope.

Shortly after, comedy turns to despair. Whether it’s the fully laden bellies of tea, the hot and humid conditions, Reggae beats drifting on the air from Lambeth Show, or a combination of all three. The general soporific and lackluster performance in the field is somewhat embarrassing. Specially as the 9 men of Grimsdyke hustled and chased everything.

There are a couple of genuine finger-tip chances but after that we really let ourselves down.

With not many runs to play with Jamie makes the first change and brings on Saj. With the wicket doing plenty it takes a full toss to the top of the pad to dismiss Bacca for 12. At the other end Steve runs in hard, beating the bat nicely but Harshaka has his eye in now and is swinging like a barn door. Up steps Fraz with some wrist spin. Grimsdyke’s spinners had shown us there was plenty of turn in the barren wicket.

Not needed, another full toss brings the second wicket. Harshaka goes for another massive blow only to splice it high and comfortably into Jamie’s hands at a wide mid-on. Collective “phew”. The openers are gone but not before reaching 102 at drinks.

Saj, at the other end is the pick of the bowlers. 7-1-16-1 doesn’t quite tell the full story. A spell that deserved more, we all felt. Kept us in the game during the middle overs.

Akhila joins his skip Fernando and Fraz continues to fizz it down with some beauties to beat the bat, Chris joins in from the other end for some spin twin action. Grimsdyke only have eyes for the boundary though, everything wide and short is dispatched. A rare single is nurdled into the leg side. With the non-striker being slightly more mobile than the other, the cry comes “bowler’s end, he’s still not here!” Chumpy’s sledging is reaching new heights.

One fielding gaff is followed by another hysterical and panicked throw. The heat is getting to the Gs and minds have already turned to the beers chilling in the clubhouse and not to the game that still has some life in it.

Fortunately Grimsdyke are trying to blugen their way to victory which means chances are always there. Chris takes the first one when Fernando pops one to mid-wicket. Safe hands this time. The final wicket is a superb moment amongst a day of wides and long hops. A super fizzing leg break from Fraz taking Akhila’s edge where Steven takes a smart catch standing up. Fraz finishing with a 3-for in his 7 overs.

Sam returns at the end with a very tight 2 overs for just 7 runs bowling nice and full. Too little too late and 4 byes take Grimsdyke over the line in the 29th over. Kind of summed up our performance.

After a 90 minute delayed start we somehow finished on time. Time for a beer and homemade hummus from the Chancellor, for which we were very grateful, and time for the oppo to begin a whole new game of 5-a-side on the outfield. We obviously didn’t work them hard enough.

If this was one of Cunners’ school reports I don’t think the usual ‘must try harder’ would cut the mustard. I fear he’d need to call in the parents to the principal’s office and dish out some tougher discipline. It’s hard not to get grumpy when a fielder lets one through the legs but it happens all too often of late. Perhaps our extended August break should involve some catching and ground fielding drills but alas, I reckon it will be mainly spent on a beach or by a pool.

Here’s to better things after the break at Fortress Turney Road! 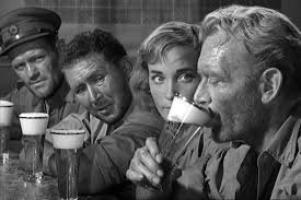