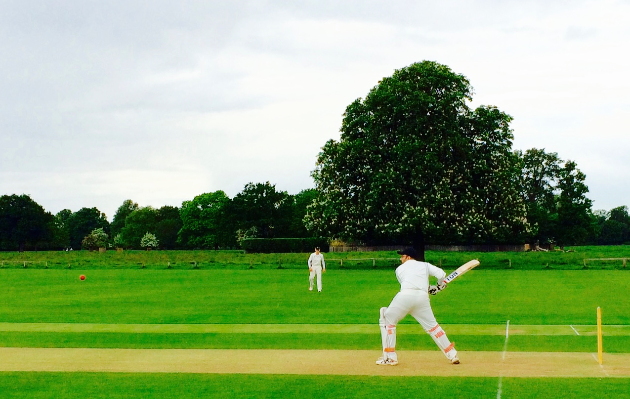 It was a quiet start to an historic afternoon. There were the now regular pre-match mutterings from the ‘WhatsApp’ group:

‘Is anyone at the ground? Am I at the right ground?’

‘Lost toss and are fielding’

Bushy Park was where we all ultimately ended up. It was a bucolic scene. Triple deep rows of lined up trees greeted the players on entrance – Royal palaces lay not far beyond. Around the pitch itself, an array of trees including horse chestnut, oak, beech, copper beech and more. Parrots (rose ringed) flew over occasionally, a German shepherd ran past once and a little girl may or may not have hit her head inside the cricket pavilion bar.

Matt, aka Fatty naked, stepped in again, as skipper for this match – following on from his match winning captaincy just one week earlier. With rain forecast for tea time, losing the toss on a flat strip was not a good start nor was trying to cover the gaps with just nine men. Saj and Arun, the ‘captain of France’ arrived three overs into the fray. Greg and Metronome kicked off the bowling, and did so pretty decently against a pair of openers intent on hitting deep. After 12 overs, Teddington were 76 for no loss with Fatty’s dropped chance at slip the only semi-reward for the bowler’s toil. This author was quietly predicting a total somewhere north of 300, thankfully that prediction was proven wrong.

The brake when it came on, perhaps surprisingly, was once again applied by the Chancellor. With his first ball he floated one up, the opener danced down the wicket, played down the wrong line and was stumped before he realised he was hitting nothing more than thin air. The Gardeners were back in the game. It was never easy but we stuck to our task, fielding well against a decent batting side on a flat wicket. Tasty and Arun were tight but unrewarded Saj bowled with power and a thirst for blood to pick up a couple of wickets and Ferris added two more with his rarely seen slower ball, one bowled with such guile that he hadn’t even realised it was his slower ball.

The catching was generally good with Andy ‘so, why are people calling me Segway?’ Offord, picking up a couple and sending a signal of calm throughout the team. ‘Andy is back, and it feels good’, was being muttered by most of the field. Greg and the skipper bowled out the last few overs, giving way little more than singles. With a target of 234 and rain still in the air, it was not an overly optimistic bunch of Gardeners who headed off to tea. It included curries and rice plus the normal sandwiches and cakes, a very good spread for those used to dining at Turney Road although perhaps the curry lacked the oomph that it promised.

Olly and our French international, Arun Ayyavooraju, opened up the batting. Arun played on early to one that kept low shortly followed by Olly, who fell the same way after a quick-fire 30. Saj, ‘I think I should bat no. 3 not 6’ has been in for an over or two but took ten balls to get off the mark, a scarcely believable statistic with what was to follow.  Cunners, the younger, joined him at the crease. From 48 for 2 after 10 overs, history was unfurled and flown with gentle grace.  Something in the air felt strange, and it felt stranger and stranger as Saj accelerated past his half century and pushed the team score past 100 and then 150. There was a superfluous change of bat mid innings, the running moved from a slow shuffle to a walk but on and on he went, moving into an environment that only the great Shomit Dutta has previously experienced for the Gardners.  As club records tumbled let’s also remember Cunners at the other end playing with calm common sense and working himself hard for the cause. Teddington too played their part sticking to their pre-game plan of giving every player at least two overs when they could have brought back their openers to close up shop.

The Chancellor proclaimed victory when we sailed past 150 and again at the 170 mark and once more at 200, all times rebuked by the ever cautious skip - Fatty Naked. In fact, such confidence was omitted by the two batsmen that Offord, due in next, started to (cautiously at first) de-velcro his pads with more than 20 runs still left to be hit. In the end, he was right to do so - the target was surpassed after only 34.3 overs with Saj contemptuously slapping a four to mid wicket, paving the way for celebratory photos and drinks.

After the ignominious 97 all out against UCS Old Boys on the opening weekend, number nine in the all time list of team disasters, it was great to write some positive Gardeners history. For the record, 181 was the highest ever Gardener’s partnership, was obviously the top third wicket partnership and Saj’s 120 not out was the second highest individual score in 20 years of GCC matches.